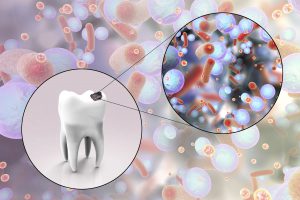 Dental caries is defined as the progressive destruction of a tooth and is considered a major health issue in both adolescents and adults, in which reportedly 90% of the population is affected(1). Cavities are formed when acid erodes the hard tissues of the teeth (enamel, dentin and cementum).

Acid is produced in the mouth when certain bacteria, such as Streptococcus mutans, ferment sugars into acid. For decades, S. mutans was believed to be the main bacteria involved in caries initiation and progression. This is no longer the case, as current research has demonstrated many bacteria are play a role in the initiation and progression of caries(2). Detecting S. mutans alone is no longer good enough. Any bacteria able to live in dental plaque, and ferment sugar into acid, could possibly cause cavities.

If an individual presents with these bacteria in their plaque, and eats sugar, they are likely to eventually develop a cavity. Screening for the presence of these three bacteria, by utilizing simple salivary tests such as the new OraRisk® Caries, allows dental providers to determine which patients are likely to develop caries before signs of a cavity are even visible. The appropriate intervention and treatment can then be applied to those patients at risk.

Matt Smith MS
Matt received a Master’s degree in Biochemistry, Molecular Biology, and Biophysics from the University of Minnesota in 2007.During graduate school Matt worked as a graduate research assistant and PhD candidate studying genetic engineering in bacteria to produce food supplements.After earning his degree he took a position as a senior scientist at Access Genetics researching cancer, infectious disease, and periodontal disease diagnosis.Throughout his career Matt has performed research and assisted with intellectual property development in a wide range of medical areas.Four companies have been founded from his research.Matt has previously worked as a consultant to the pharmaceutical industry and routinely speaks at international medical meetings.Matt is a world-renown diagnostic test developer having led development on over 40 clinical diagnostic tests.He currently serves as Vice President of Research and Development at Access Genetics and Oral DNA Labs in Eden Prairie MN.
Latest posts by Matt Smith MS (see all)