The oral cavity, which has a close nexus with the brain, is home to hundreds of species of bacteria. While most are harmless, a few types (e.g. P. gingivalis) can promote gum disease. Patients with Alzheimer’s disease (AD) are more likely to have higher levels of harmful gum disease-related bacteria. The presence of the bacteria in the gums also triggers an immune response, and an uncontrolled immune response can lead to chronic inflammation of the gums, called gingivitis. If left untreated, the bacteria continue to accumulate, leading to a more serious chronic infection called periodontitis. Studies in lab animals have shown that both the bacteria and the inflammatory molecules can make their way from the mouth to the blood and into the brain. Once in the brain, bacteria release enzymes called gingipains that can destroy nerve cells, which in turn can lead to memory loss.

Bacteria associated with gum disease, such as P. gingivalis, have also been found in the brains of AD patients. In one study, researchers examined the brains of 53 deceased people who had suffered from Alzheimer’s and found high levels of gingipains in almost all of them. They also noted that the concentration of gingipains increased over time, suggesting that there may be a threshold when dementia symptoms first begin. The presence of the bacteria in the brain promotes inflammation and triggers brain pathology associated with AD.

Furthermore, oral bacteria associated systemic inflammation is linked to diabetes and cardiovascular disease, which in turn are risk factors for dementia. Thus, inflammation due to poor oral hygiene practices may be a common mechanism linking these risk factors. Additionally, an improper diet also increases the risk for all of these conditions. A diet rich in processed foods that contain lots of easily digestible sugars can promote the growth of the disease-causing bacteria in the mouth. Eating too much sugar and highly processed food leads to metabolic changes that promote inflammation and makes the immune system more vulnerable to infections, thus putting the individual in an endless loop of persistent infection and inflammation due to faulty dietary choices and poor oral hygiene practices.

Good oral hygiene is multi-faceted. It involves routine dental care, diet, and management of chronic diseases. While some medications can trigger dryness in the mouth, soda, fermented juices, and many foods can create an acidic environment in the oral cavity. Acidic foods/fluids and a dry mouth fuel the growth of the pathogenic bugs. If you have a dry mouth, talk to your doctor about your medications and find out if adjustments can be made. Patients that have AD typically experience worsening oral health as their condition progresses. In the earlier stages of the disease, patients can often continue their daily routines — including brushing their teeth and maintaining their regular visits to the dentist. As their condition worsens and their cognitive function decreases, AD patients tend to forget these routines, which can have detrimental effects on their oral health and overall wellbeing.

Prevention is vital when it comes to caring for someone with Alzheimer’s. Diets rich in non-starchy vegetables and some resistant starches are recommended to avoid inflammation triggered by oral bacteria. Prioritize vegetables that are below 35 on the glycemic index and choose organic, seasonal fruits with a low glycemic index to promote the growth of healthy bacteria. Probiotics for oral health such as S. salivarius can help to reduce pathogenic bacteria. Just as there are benefits to optimizing your gut microbiome, there are also benefits to optimizing your oral microbiome. Remember, the road to good cognitive health begins in the mouth. Protect your brain by taking care of your mouth, gums, and teeth with good oral hygiene practices.

On November 15 at 7:00 EST, Complete Health Heroes will be hosting a webinar titled “Bring Life to Your Oral Systemic Practice Through Dementia Care Certification.” Medical doctor and ReCODE educator Chip Whitney will introduce attendees to the importance of periodontitis, airway, and mercury amalgams as root causes to Alzheimer’s Disease. Join us by registering today.

To learn more regarding ReCODE, visit their page on our Protocol Directory. 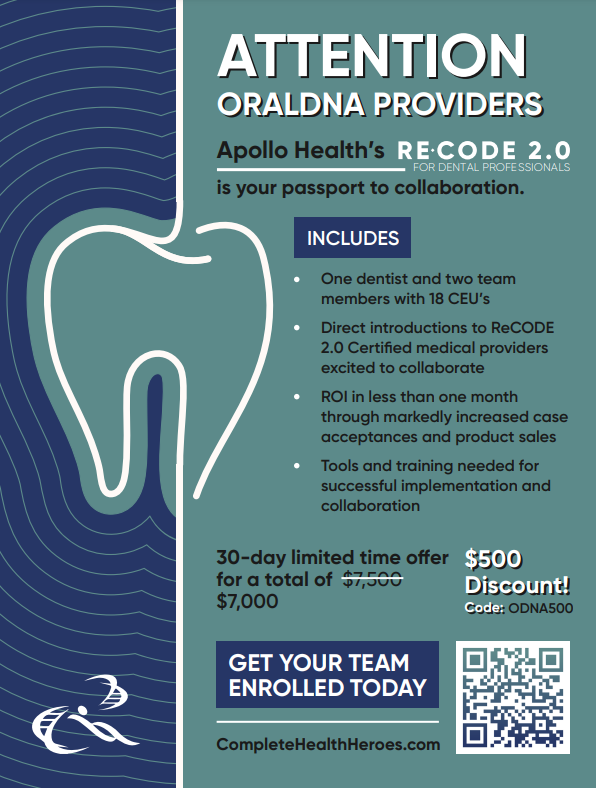 Rammohan Rao PhD
Dr. Rammohan Rao, popularly known as Ram, has a PhD in Neuroscience and is the principal research scientist at Apollo Health. His research focus was in the areas of chronic stress, neuronal cell death and mechanisms of age-associated neurodegenerative diseases with special emphasis on Alzheimer’s disease. Ram has 25+ years of research and teaching experience in Neuroscience. He is also a National Ayurveda Medical Association (NAMA) board certified Ayurveda Practitioner and a Registered Yoga teacher (RYT-200) from Yoga Alliance USA. He teaches Ayurveda and Yoga at the California College of Ayurveda. Ram has published several articles in major Yoga/Ayurveda journals and is a featured speaker in several meetings and symposia. He is a member of the National Ayurveda Medical Association Accreditation Committee (NAMAC) and member of the Research Board of the Association of Ayurveda Professionals of North America (AAPNA).